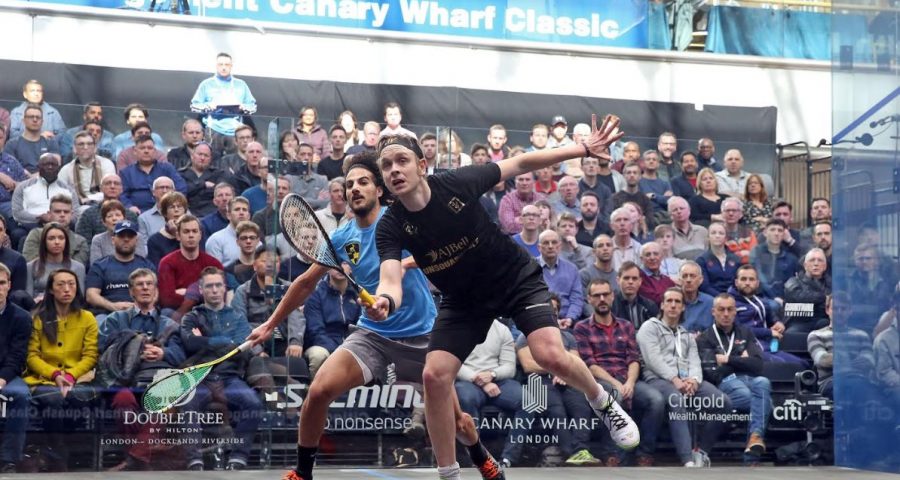 The opening day of action at the 2019 Citigold Wealth Management Canary Wharf Classic saw a quartet of Englishmen claim victories on ‘People’s Sunday’ at London’s East Wintergarden as James Willstrop, Tom Richards, Declan James and Daryl Selby all advanced to the last 16 of the PSA World Tour Gold tournament.

The Citigold Canary Wharf Classic is trialling a best-of-three games format up to and including the quarter-finals for a second year in a row and Willstrop – the highest ranked English male on the tour – put in a composed display to see off Egyptian shot-maker Mazen Hesham by an 11-9, 11-7 scoreline.

“I don’t very often fist pump, but walking into this [atmosphere] this morning, I don’t want to stop doing this job,” said Harrogate-based Willstrop.

“It’s an incredible thing to walk into this atmosphere, and [Tournament Director] Tim Garner and everyone behind this makes it an incredible event.

“I want to be here tomorrow and play again in that atmosphere. This doesn’t happen by accident, and what a great crowd. It’s become one of the top events on the tour, and it’s certainly one of my favourites.”

Willstrop will play Australia’s No.8 seed Ryan Cuskelly in round two and will be joined by his England teammate James after he got the better of Scotland’s Greg Lobban.

Together with Willstrop, James claimed a Commonwealth Games Bronze medal in the men’s doubles event last April in Australia, and the duo overcame Lobban and his teammate, Alan Clyne, in the playoff.

Lobban had beaten James in the final qualifying round of this tournament last year, but this time the win went the way of the Englishman as he hit his lines well and played through some traffic issues to win 11-8, 11-5 in 31 minutes.

“I think we both started pretty nervously and there was a bit of traffic in the middle,” James said afterwards.

“I think that was because there were a few nerves and we weren’t quite hitting through the ball, that’s why it got a little bit scrappy. The end of the first was crucial really, I managed to find my basics and was able to put away a couple of shots at the end.”

World No.10 Marwan ElShorbagy lies in wait for James in the next round, while Richards will go up against New Zealand’s World No.7 Paul Coll after beating Clyne 2-0.

Elsewhere, an all-English clash between World No.21 Selby and George Parker, the World No.31, saw Selby emerge victorious after he came from a game behind to dispatch the man from Leicester.

“I knew it would be [tough], George is a phenomenal athlete, a phenomenal player and, to be honest, he is only getting better,” Selby said.

“Every win I can get against him I cherish now because, and I have told him many times before, I think he is going to go to the top. He has a few things that he is always working on, but I am happy to beat George to be honest, it was a tough draw.”

36-year-old Selby was one of five players over the age of 30 to claim wins on day one, with Willstrop, Richards, Borja Golan and Mathieu Castagnet the other veterans to advance to the last 16.

Aged just 15, Todd is the youngest player ever to appear at the prestigious Citigold Canary Wharf Classic, and the World No.494 has found great success on the junior circuit, reaching the final of the British Junior U17 Open in January, before winning the British U23 Open later that month.

However, the experience of Castagnet shone through at East Wintergarden as the Frenchman won 11-6, 11-1 in 17 minutes, and the World No.26 will play World No.5 Simon Rösner for a place in the quarter-finals.

“He surprised me to be honest. I used to train with the French players, the under 13s, 15s and 17s and the quality of his shots were just amazing,” said Castagnet.

“When he is better physically, and he is more focused on his game plan and more solid, he is probably going to be an English No.1, for sure.” 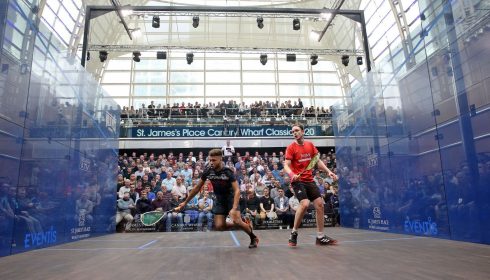 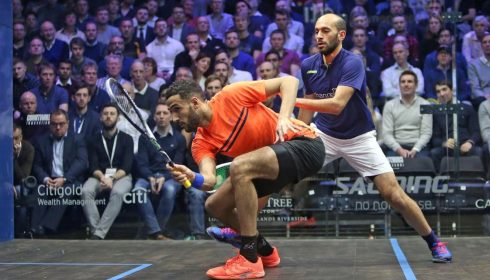