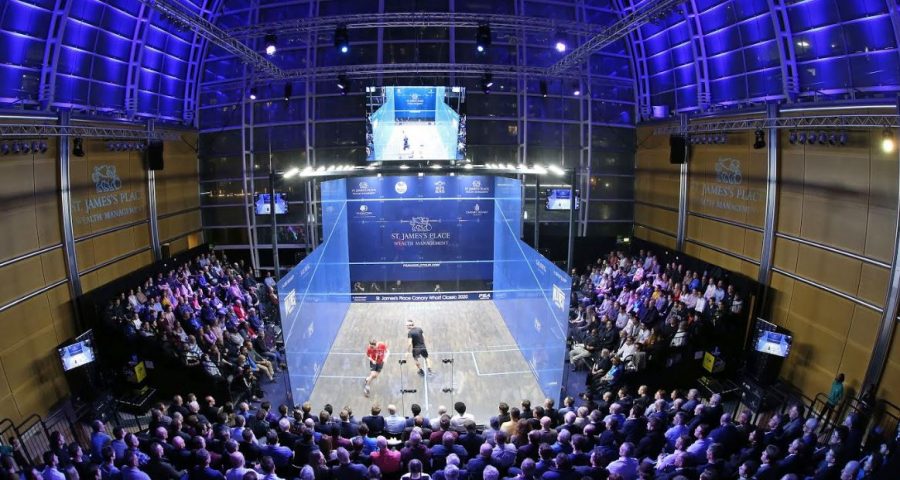 The 17th edition of the Canary Wharf Classic continues tonight in London with four second round matches.

Today’s matches are best of three, and you can Watch Live on SquashTV and more, follow on Live Scoring, and we’ll have a roundup at the end.

Diego Elias stormed into the quarter finals with an impressive performance against Englishman James Willstrop.

The Peruvian showcased the skills that have taken him to a career-high ranking of No.6 in the world as he saw off a determined challenge from his 36-year-old opponent in a match of high quality – despite it lasting only 24 minutes.

The 23-year-old took a 3-0 lead in the opening game, before Willstrop came back strong to win the next six points. But he closed out the game and never allowed his opponent to get a foothold in the second as he utilised his drops and a sumptuous backhand crosscourt volley to great effect.

World Champion Tarek Momen came through a tense encounter with Daryl Selby as he booked his place in the quarter finals.

He survived a scare when his English opponent – potentially playing his last Canary Wharf Classic at the age of 37 – took the first game 11-9.

Tarek then raced to a 7-0 lead in the second, only for Daryl to fight back to 8-10 before eventually succumbing 11-8.

The final game was nip and tuck, but the luck was with the Egyptian who hit two dead nicks in a row on the way to a hard-fought 11-8 victory. He will now face Peruvian Diego Elias in the quarter final.

Number one seed Mohamed ElShorbagy will be a relieved man after being pushed to the limit by Mathieu Castagnet.

He looked comfortable in the first game, which he took 11-6, before the unseeded Frenchman battled back by using his phenomenal retrieving abilities – and ability to hit nicks, to take the second 11-8 and force a decider.

There was nothing to choose between the players in the final game as they drew level at 9-9, with Mathieu belying his ranking of 22 in the world to match his Egyptian opponent in terms of intensity, quality and execution.

But Mohamed, no stranger to hitting nicks, just managed to squeeze out the win and book his place in the quarter finals.

“He is a warrior. He had a really bad injury and he is making his way back. I know his ranking is still outside the top 20 but the level he can play at…once you are a great player, you don’t just become a bad player. You stay great and luckily I pulled through at the end!” Elshorbagy said.

“The best-of-three format changes the dynamic of the sport. It will be short, sharp rallies and you will play at a very high pace. With the best-of-five you have to think about the whole match, and think about your energy throughout the match. I am proud of my mental performance today. I got lucky today and I know I need to try and improve for the next round.

“I have always enjoyed playing this event and the crowd are always fully supportive from the first day. We play for the crowd and they make it really exciting for us to play. It is close to Bristol, my home, and I definitely enjoy playing here.”

Saurav Ghosal caused the day’s only seeding upset with an impressive win over the German Tree Chopper Simon Rosner.

He managed to keep his focus despite a long delay in the first game after accidentally catching his opponent with an elbow that left him with a bloody nose and forced the match to be temporarily halted.

He eventually prevailed 13-11, before Rosner proved he’s made of strong stuff and fought back to take the second 11-7. Saurav then cruised the third winning 11-4.

Speaking afterwards, he said it’s all about fine margins at the top of the game and he was delighted to beat Simon, who has been playing well and doesn’t get enough credit for his short game.

“I think it was a culmination of a couple of things. I was 9-5 up, the momentum was with me, and especially when you are playing Simon, it is so difficult to get that against him because he has such good power and a great touch art the front of the court,” Ghosal said.

“He stepped up and played some really good stuff but I am glad that I was able to finally win it because I think on the balance of play that I deserved to win it. Beating a player of that quality, in the form that he is in right now, is a really good win for me!”